As we approach the end of another school year and look forward to the Christmas season ahead, I also look back over an event-filled 2019 in the life of Emmaus. Established in 1979 as Bethesda Christian College, 2019 has seen us reflect on 40 years of Christian School ministry, one of the oldest distinctly Christian Schools in South Australia.

campus in Brooklyn Park. The mission however is NOT about growth or enrollment numbers but the perennial and uncompromising purpose of our College declaring "Jesus Christ is Lord” (pictured on the College founding plaque – now housed on my office wall following a few name changes!).

The establishment of our new Brooklyn Campus opening in 2020 has been a significant ministry for the College. At the time of writing approximately 50 new faithful families, ELC to Year 2, have already enrolled to start at Brooklyn Park at the beginning of 2020. Although there maybe two campuses we are one school, one community, and one Emmaus family. The photo below was taken a few weeks ago during an F-2 transition day of all 2020 F-2 Brooklyn Park students and families. A similar size matching photo will be taken mid-January 2020 of all new ELC students and families starting at our new campus. Together these photos will represent the Emmaus Christian College Brooklyn Park pioneers. We welcome and embrace you all as part of our family! 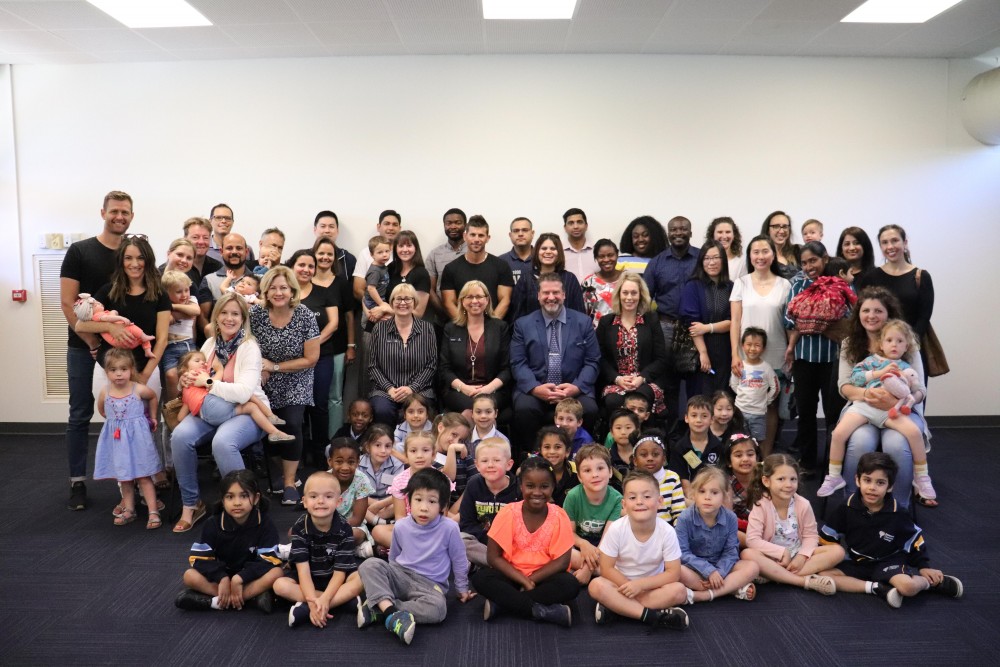 As we approach Christmas it is important we all take a pause and refocus from the ways of the world towards the true meaning of Christmas, the birth of our saviour Jesus Christ. I leave you with words from a source I have long since misplaced, to set your heart and minds on the true meaning of the season.

It was about to begin – God's plan for humanity, crafted in the halls of heaven and carried out on the plains of earth. Only holiness could have imagined it. Only divinity could have enacted it. Only righteousness could have endured it. And once the plan began, there would be no turning back. The Creator knew it. The Son knew it. And soon, earth itself would witness heaven's majesty alighting on the planet. When God chose to reveal himself to mankind, what medium did he use? A book? No, that was secondary. A church? No, that was consequential. A moral code? No. To limit God's revelation to a cold list of do's and don'ts is as tragic as looking at a Colorado road map and saying that you'd seen the Rockies.

When God chose to reveal himself, he did so through a human body. The hand that touched the leper had dirt under its nails. The feet upon which the woman wept were calloused and dusty. And his tears ... oh, don't miss the tears ... they came from a heart as broken as yours or mine ever has been.

So, people came to him. My, how they came to him! They came at night; they touched him as he walked down the street; they followed him around the sea; they invited him into their homes and placed their children at his feet. Why? Because he refused to be a statue in a cathedral or a priest in an elevated pulpit. He chose instead to be Jesus. There was not a hint of one person who was afraid to draw near him. There were those who mocked him, were envious of him, and
misunderstood him. There were those who revered him. But no one considered him too holy or too divine to touch.

There was not one person who was reluctant to approach him for fear of being rejected.
Remember that the next time you find yourself amazed at your own failures.
Or the next time acidic accusations burn holes in your soul.
Or the next time you see a cold cathedral or hear a lifeless liturgy.
Remember. It is man who creates the distance. It is Jesus who builds the bridge.
On behalf of the entire Emmaus staff I pray for a safe and joy filled Christmas season for you and your family.